And it was of the best decision ever.

I sleep with cats.  I didn’t used to, I even thought it was gross.  But people evolve, for better and for worse and in this case, it is for better!

For 6 years now I have fallen asleep with our little girl at my feet, and woken up with our big girl on my head (literally).  But since Kodi became a forever resident, the dynamics have changed.

He had become a little clawing vampire, a purring excavator: the deeper the claws dug into the flesh, and the more blood he extracted, the calmer he became.  No. No more.

Declawing is not an option.  But I still have quite a problem on my hands. My big girl doesn’t like me anymore since she’s lost most of her cuddle time, and I can’t sleep.

Soft Paws to the rescue.  They are little plastic sheaths that you glue over the cat’s nails.  The cat can still do whatever it is that cats do, but they won’t pierce your skin (or destroy furniture, but in our house, furniture is much lower on the priority scale than cats – much lower) with their spiky daggers of death.  Soft Paws come in all kinds of colors and if you do an internet search, you’ll find that people are becoming quite creative with their cats’ look.  We chose black. Sleek and elegant. You can glue them on yourself, but for the first time, I wanted it done correctly and took our house panther to the groomer. They last about 4 weeks, then they fall off when the cat’s claw naturally sheds its layers.

Two days later and he’s already broken the tip off of one of them! 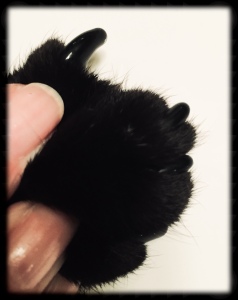 Deworming is a must.  But it comes with side effects that we were not prepared for.  We took our babies to the shelter for their preventative care, and the vet (overwhelmed after having performed 50 surgeries that morning without her full staff on board) casually mentioned the kittens may have diarrhea and be tired.

What we didn’t know is that “tired” would mean Rocky would suffer temporary paralysis of his front paws for about 24 hours.  It was scary.  It was heartbreaking.  He was trying to get up, but his body would fall forward.  And of course we realized what was going on in the middle of the night, on a weekend.  He was alert, bright eyed and ate well if you brought the food right under his chin.  He would roll on his back and play with Henry.  If I pinched his paws (not hard), he would yelp a bit.  Googling the symptoms was actually reassuring since we figured out the probable cause, but we couldn’t find how long it would last.  He spent all that time cuddling up next to us, nestled in the bed blankets.

All is fine now.  But be warned in case this happens to your kittens.

Doesn’t he look like the most happiest kitten in the whole wide world?

Rocky needed a playmate.  He loves playing with Kodi but I, a human who is fairly new to orphan kitten behavior, decided he could benefit from having a buddy his age to wrestle with.  Kittens are aplenty in the shelters, and after a few days of placing the request, I got a photo of a tuxedo cat.  And off to the shelter I go.  But not without first asking my big guy if he agrees.  He does of course.

They handed me a wild little thing!  It screeched all the way back home, trying to claw its way out of the carrier.  Not a happy camper!

I let him roam around a bit in the bathroom before giving it a bath.  Have you ever given a cat a bath?  That in itself should be its own reality show.  Cats do NOT like water.  And cats have claws, which explains why I now sport all kinds of injuries on my wrists!  But I think I got 90% of the fleas out.

It’s a rather big kitten, bigger than Rocky, yet its teeth are less developed.  It’s a boy. And he hisses and screams like a feral cat when he’s not happy.  But over the course of one evening, he became a very loving, happy, free kitten.

His name is Henry, to be pronounced with a stiff upper lip.  He’s black and white.   My relative Henry was colorblind.  Hence Henry.  More specifically, Henry Of the Poisonous Claws.  Yes, we think that’s funny!

Travelling with kids is no picnic.  Traveling with a 5-week old kitten is worse.  Why you ask?  Because children are welcome in hotels.  Kittens are not.  You either have to find a hotel that claims to be animal friendly (“Sorry, only dogs are allowed”), or sneak the kitty in.  We are good people and opted for the first, not wanting to transform into kitty smugglers!

Rocky came with us on a road trip last week.  We had to go to Austin and then San Antonio.  Our big cats can stay home alone for a night without problems, but the little one still needs constant care.  Should we sleep in Austin the first night or drive to San Antonio after his meeting?  We pondered that question for a few hours until, duh, I am not staying with the kitten in a hot car for several hours while Daddy is in a business meeting!  While Daddy was closing business deals, I had a photoshoot with the little one.

The next day, Rocky got his first public outing.  We took him inside the restaurant with us, snug into his carrier.  He didn’t meow a word and drank a bit of water out of a bowl, and had his first taste of meat: fajita beef.  He likes it!

He’s a wonderful traveler.  And we didn’t realize how much he would eat so we ran out of food.  I know, I know…  So we stopped at Petco, brought the carrier inside and fed him paté right there.  There was a huge enclosed area inside the store where they have the training sessions for dogs and we asked if we could let our kitten loose in there.  Rocky loved it.  He went running around, sniffing all those new smells and ran away from us when it was time to get back on the road. That little one runs so fast now!

All in all, he spent about 10 hours in his carrier over 2 days.  We love him so much!

As can be expected, we love our new baby.  He’s been through a lot (and so have we).  He’s a fighter, a mighty cat, a survivor.  Hence his name: Rocky.  Because you know, the Survivor song, theme of the movie Rocky.

He’s a bit small for 5 weeks old, but has a ton of oomph in him.  He has never learned to suck on a bottle, preferring instead to chew on the nipple to get the milk to come.  Lately, he’s simply chewed the nipples off.  So, he’s pretty much off the bottle now.  It’s a bit early but he’s lapping the milk out of a bowl, which, in turn, is a bit early for a kitten to do.  He also uses his litter box and eats wet food out of the can.  He’s a big boy. He rocks.

He doesn’t have a litter mate obviously, but Kodi is a great big brother.  Whenever we take Rocky out of the playpen, Kodi comes running, and proceeds to annoy him.  He knocks him down, paws at him, bites him, wrestles with him, and then gives him a tongue bath…  We were a tad concerned when we heard some pitiful meows, but then saw the tiny one attacking his brother’s tail, so it can’t be too bad!  We now let Rocky loose in the house for an hour or so, and if we lose sight of him (he’s so fast and tiny and climbs into crevices), all we have to do is look for Kodi, who, inevitably will be staring at that mini fur ball.

Boo died today, at 12:35pm.  He spent the morning on my chest while I was reading, making little noises, crawling back towards my neck before falling asleep.  At noon, I got out of bed (don’t judge me until you feed bottle kittens around the clock) to get ready to take the whole crew to the vet.  When I picked him up, he died in my hands, just like that.

Boo is the only one we had really named.  He came with nasty flea bites on his tail.  He had booboos on his tail, hence Boo.

He was the biggest of the three, strong and always hungry, the first to learn to latch on the nipple.  Yesterday, he started being finicky, and had diarrhea.  At midnight, my husband woke me up because Boo was refusing food.  We got some Pedialyte to rehydrate him.  We planned on being at the clinic when they opened at 1:00pm.  Boo didn’t make it.

It was none of the common parasites.  Kittens are fragile creatures and can take a turn for the worse in a matter of hours.  I don’t even have a picture of him with his eyes open.

We are naming the other ones The Boos.  You are gone Baby Boo, but you will not be forgotten. 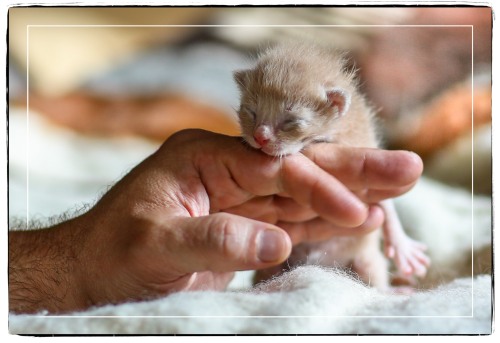 Duchess and her kittens have found a new foster home.  We will be traveling too much in the next few weeks to be able to care for them correctly.  They have been “handed over” to a rescue organization, and now have a full room to themselves, that they share with two black feline siblings.

It’s all quiet in here.  And it no longer smells of poo!  I miss getting up in the morning, checking on them, and being welcomed by five balls of fuzz.  But my job is to get them out of the danger zone (ta ta tammmmm!) and onto their new life.

Happy Easter from Duchess and the Fuzzies!

Here’s their Easter portraits, taken March 8, when they still had their eyes closed, yet their mouths were wide open! 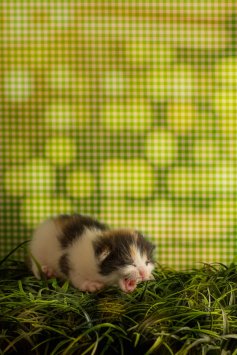 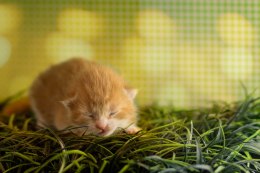 They are going to their new foster family in a few days, so tomorrow is photoshoot day.

Duchess is a feeding tube.  Her entire life is about feeding her 5 kittens.  She eats, poops and nurses.  That’s it!

We have had her now for 11 days, and she has lived exclusively in the playpen since.  It has to be boring.  She hardly ever leaves her babies.  She does pee and poop away from them, but she gets no exercise, no entertainment, nothing.

I was starting to worry about her muscle tone, since she lays down about 98% of her time (and remember we have a camera in there to check on the family).  So tonight I took her into the bathroom, on her own, and let her roam around.  There was at first no roaming, no walking.  She snuggled next to me and let me comb her.  I lifted her next to the sink and she started exploring, knocking stuff down off of the counter.  That lasted a few minutes, and then she sat in front of the door and looked at me with a pathetic look on her face.

I brought her back “home”, and she laid down next to her kittens again. 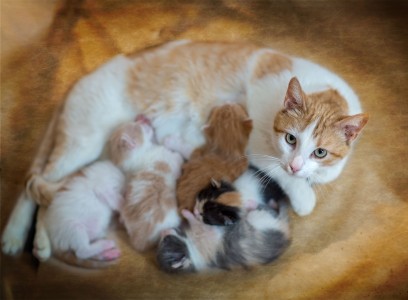 She’s the most beautiful momma cat ever.